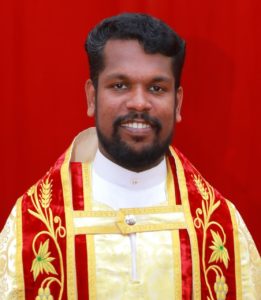 Currently our Vicar of The Marthoma Congregation JP Nagar Bangalore.

The Mar Thoma members who settled in South Bangalore towards the end of the first decade of the 21st century felt the need for a Christian fellowship and a worshipping community in their vicinity. Earnest prayers of the early group of members and the grace of God along with the swelling number of residents to this part of the city propelled the need for a place of worship in this area.Thus the ever increasing group of members traces its formation of a congregation by early 2013. To suffice the spiritual need of the members a prayer group was formed and Holy Communion service was celebrated once a month.Subsequently by the tireless efforts of the members of the prayer group and the vision of the church leaders and benevolence of God Almighty gave shape to the J.P Nagar Mar Thoma congregation on 23rd May 2018. The first worship at the newly formed congregation was held on 3rd June 2018 andRev. Abraham P. Abraham was the first vicar. The congregation which started with around 49 members by the immeasurable grace of God has grown to over 80 families today and has been blessed with the service of a full time serving vicar. Today the congregation recites the story of the God who in the past led the Israelites from the wilderness to thePromised Land hasenabled this congregation to travel a long miles from its infancy.

The book of Acts of apostle in the bible pointsto not only the history of the church but also the history of the struggles, passion and dedication of the disciples to spread the gospel all over the world. In the midst of many threats the church found its unity and strength in the faith of resurrected Christ. In Acts 4. 32 we read, “Now the whole group of those who believed were of one heart and soul”. The faith in Christ’s resurrection united the people. The resurrection forges new communities of light and life. Only in such fellowship (koinonia) is the meaning of the resurrection progressively discerned and demonstrated, learned and lived out. The apostolic community strengthened their faith through the communal practices, such as baptism, the Eucharist, study of the scripture and prayer.How Christ’s resurrection motivated such a unified, generous community, is still motivating the world.

Christ’s resurrection is inextricably connected with his crucifixion. Christ’s death on the cross, signifying ultimate self-emptying and sacrifice. The crucified and risen Christ thus inspires us to find new life as they “deny themselves and take up their cross daily” (Luke 9:23). It is out of this experience of complete surrender that God brings fresh, resurrection life. It is to be like a seed that falling into the ground, “dying,” and then bursting forth, “rising” in fruitful bloom and flower (St.Jn. 12:24-25; 1 Cor.15:36-38).

It was the faith in the resurrection of our Lord and Saviour Jesus Christ and the hope it gave that enabled the church overcome the persecutions they had experienced in the first century. Christ’s self-sacrifice through death in the cross should be a lesson to us. Like the early church, faith in the resurrection of Christ and the willingness to sacrifice our self (Agape) and the unity will help us to become a perfect spiritual community. It can be possible only through the strongrelationship with Christ. Only the branches that have a strong relationship with vine can be fruitful. Let us stand together to build God’s Kingdom of God by having astrong relationship with our Lord Jesus Christ.  May our spiritual gatherings as congregation enable us to achieve them.